If Gertie can sell it, she will...

Crazy
Gertie was brought up by Percy and Gladys Stonethrower in the small town of Gelded Stone. Short of stature and gruff in nature she was mistaken on many occasion for a dwarven child.

Every family member in the Stonethrower family would have a role and on her 14th birthday Gertie was given that role; to catch the meat to put on the table. Her mother was a weaver and she had made many nets to catch the fish that was plentiful in their homeland. Gladys knew how dangerous fishing was as she had lost her first daughter to the seas, but Gertie knew better and refused to wade into the sea and become its next victim.

She turned to her father and asked why she had the name Stonethrower. He advised her that her great great grandfather was the first Stonethrower and he would lob great stones at deer's and bring them down in one swoop. But alas this skill had been lost by his predecessors and he was now just a gardener.

Gertie was determined to bring this great skill back and make her name mean something again. She made a catapult and ran into the forest to see what she could bring home for dinner that day. She shot down birds, giant wasps, toads and her very first jackalope. She took her hoard home and her family ate a great feast that night. Her favourite of all the meats was the toad, it tasted of sea chicken (seagull) but was smooth like liver. It truly was a delicacy.

Gertie became famous for her stone throwing skills and soon made a name for herself. If you needed it taking down Gertie would do it and get paid for it too. But one day she was out hunting in the woods for her favourite food and she saw a man standing in a glade; he was the most beautiful thing she had ever seen.

He was hunting a TOAD! And with his bare hands and just a small dagger, he jumped and threw himself upon them, wrestling them to the ground and stabbing them in the head, he was an artist..and she fell in love the moment she saw him.

He spotted her as he twisted the dagger one more time (NB Toads are about the size of a pig in Gelded Stone),' Hello there my woman, can I help you at all?' His voice was like birds singing, her heart skipped a beat.

He replied ' I do, I hate the ruddy things, always trampling on my crops, but I tell you what, they taste like ruddy heaven'.

'What's your name? Mine is Gertie'.

He looked up his eyes widened and his voice softened ' Gertie, I have never heard a more beautiful name. And to be paired with such a beautiful woman, this truly is a special thing, I am Pobbin, Pobbin Toadhunter'.

Gertie blushed and helped him from his knee to standing height. He was a little taller than her but still a short man none the less. She noticed his big eyes and handsome ears, his shapely nose and the tufts of hair that grew from it.

He looked at her tiny eyes and wide nose, her beautiful lips and shapely bosoms. He was in love.

From that day forth Gertie and Pobbin have been together, hunting toads amongst other things. They have created a huge family of 12 children and live in their cave with a homestead of crops of flax, turnips, potatoes and carrots. Pobbin even tried to breed Toads once however this failed miserably as Gertie couldn't resist eating them.

Gertie has taken to trading now, as she has travelled far and wide with Pobbin to hunt many breeds of toad. On her travels she has picked up many unusual items and artifacts. She spent 2 years in a commune of soothsayers and learnt the power of persuasion and distraction. She had also taken to mixing potions and lotions to aid travellers with their ailments. Gertie would always test her potions on herself and many botched experiments have left her with a strange hue in her hair and a 'crazy tick'. 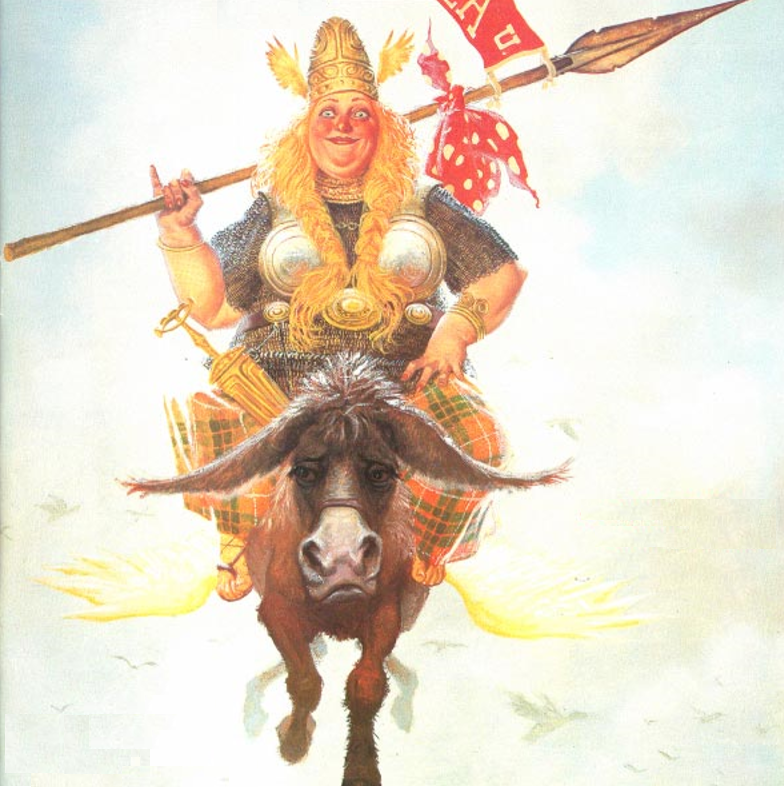 Retrieved from "https://fools-and-heroes-norwich.fandom.com/wiki/Mamma_Gertie?oldid=732"
Community content is available under CC-BY-SA unless otherwise noted.